Better outcomes for hundreds more people with anxiety and depression

“It was a fantastic service that helped me think differently long-term. I am a different person after having this, I am so glad that my doctor referred me. I would like to thank the service so much for changing my mindset in positive way.”

Hundreds more people have been able to get their lives back on track following mental health issues, thanks to a new approach in the Oxford AHSN region.

Oxford AHSN reviewed Talking Therapies services in the region, to ensure more patients got the best treatment first time. A sustained ten percentage point improvement has been achieved in recovery rates for people experiencing anxiety and depression, from 48% to 58%, compared to national rate of 45-48%.

The success was down to two significant factors:

From a baseline of January 2014, an additional 2,659 patients had recovered by November 2015. This was achieved against a backdrop of rising demand for psychological therapies in Berkshire, Buckinghamshire, Oxfordshire, Milton Keynes and Bedfordshire during this period – a 16% increase in the number of patients accessing these services over the same period – and no increase in funding.

Independent analysis also found that the knock-on effect of these improved patient outcomes was an estimated £750,000 in savings mainly through reduced demand on health services. 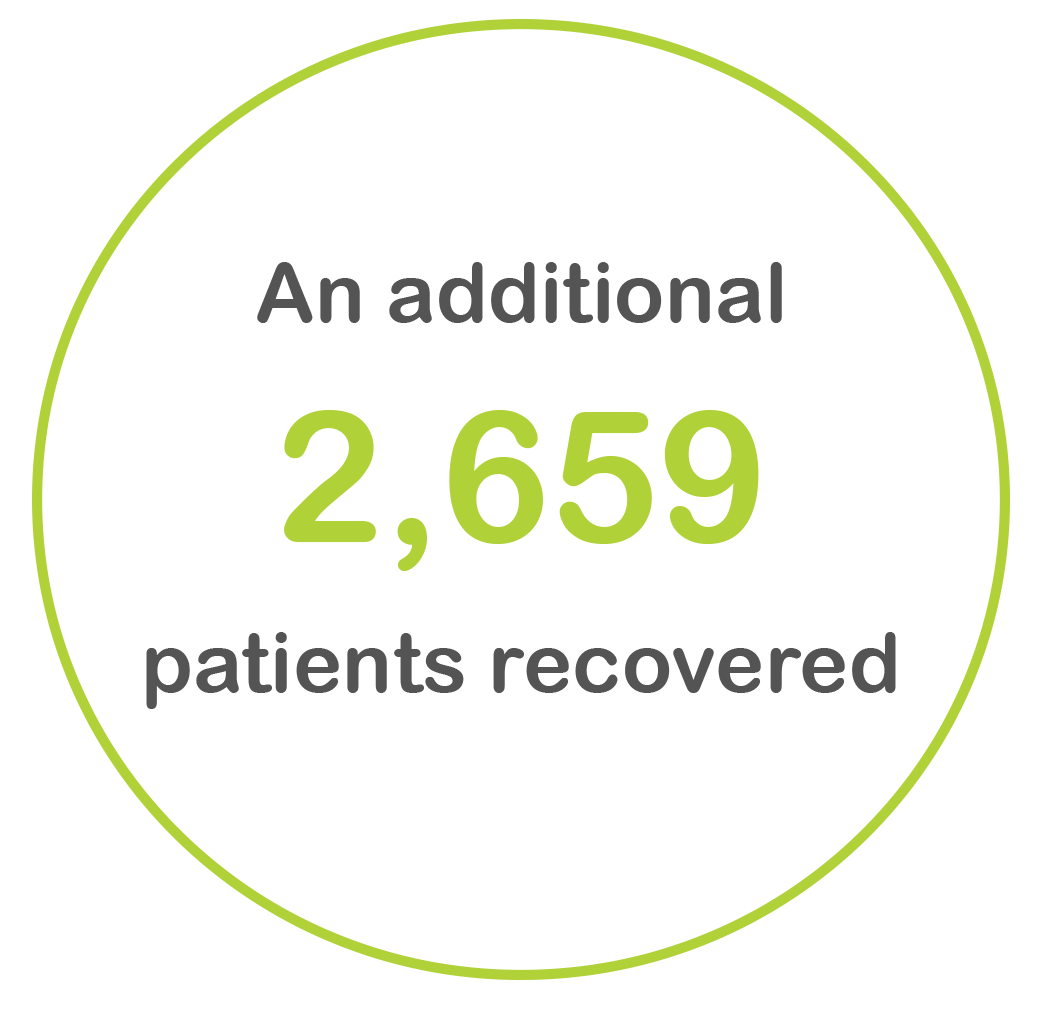 In Britain today, one in six adults suffers from depression or a crippling anxiety disorder and it is estimated that at least a third of families includes someone who is mentally ill.

The particular focus was on better collaboration between existing networks and improving the depth, quality and timeliness of data collection to better understand variability in outcomes.

A different approach to ensure patients routinely get the best evidence-based treatment first time was put in place. This involved closer collaboration through the Oxford AHSN to share knowledge, test service innovations, provide targeted staff training and build on patient feedback. A new process was initiated around monthly collection and analysis of key performance data with feedback to individual services.

The initial focus was on collecting comprehensive data, feeding back significant variations to regular meetings of service and performance leads to investigate and discuss potential changes to bring about better patient outcomes.

‘Enhancing recovery’ workshops attended by over 1,000 people have been run across the country with NHS England during 2016.

The anxiety and depression recovery rate target (a five percentage point improvement) was exceeded – an increase of ten percentage points (48% to 58% in March 2016) was achieved and maintained against a national rate of 45-48%. 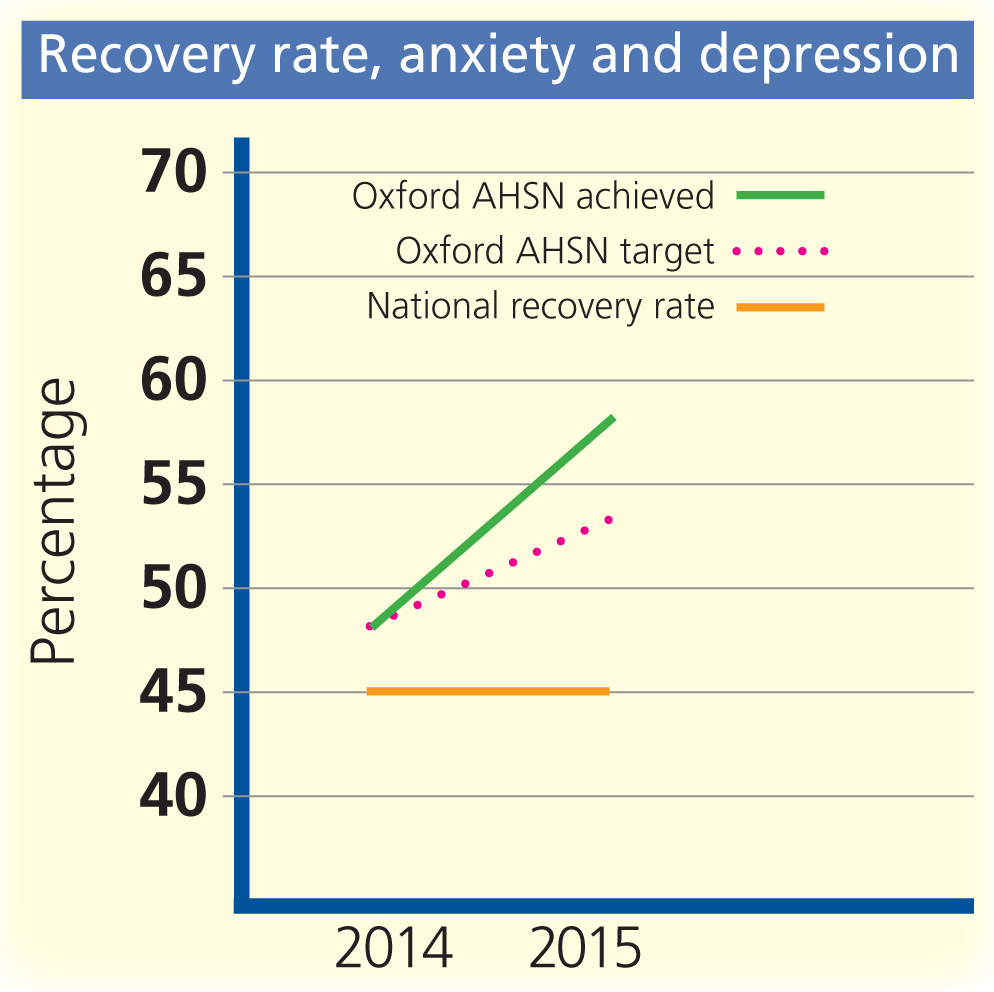 From a baseline of January 2014, an additional 2,659 patients had recovered by November 2015 – at a time of rising demand and flatlined funding.

Two years after the end of their treatment over 1,600 extra people are still in recovery over and above the national rate.

Independent analysis by the Office of Health Economics (OHE) found this project saved approximately £750,000 mainly through reduced demand on health services (based on an investment of £142,000). The OHE estimated an additional 384 people returned to work over and above national rates.

Oxford AHSN clinical leaders shared their success at regional ‘enhancing recovery’ workshops at the request of NHS England during 2016. These took place in Birmingham (March), Leeds (April), London (May and October) and were led by Professor David Clark, the Oxford AHSN Anxiety and Depression Network Clinical Lead for adults, with IAPT Service Leads including Dr John Pimm (Bucks) and Judith Chapman (Berks). In addition, they presented at three national workshops for wave 1 early implementer integrated IAPT sites in autumn 2016. These seven events were each attended by an average of 200 people so approximately 1,400 in total. In addition, a further 80 people attended an extended network conference hosted by the Oxford AHSN Anxiety & Depression Network in Reading in November 2016 which covered similar ground and attracted attendees from beyond the Oxford AHSN region.

Clinical networks within the Oxford AHSN region and beyond have been strengthened.

“I wanted to congratulate you on the recovery rate you are now achieving following a quite extraordinary turnaround. I hope that others can learn from the immensely impressive transformation you have effected.”
Norman Lamb MP, former Health Minister

Ongoing discussions are taking place around how best to achieve further improvements in recovery rates and reduction in variation across the Oxford AHSN region.

The Oxford AHSN Anxiety and Depression Clinical Network is continuing to share best practice at regional workshops across the country with NHS England.