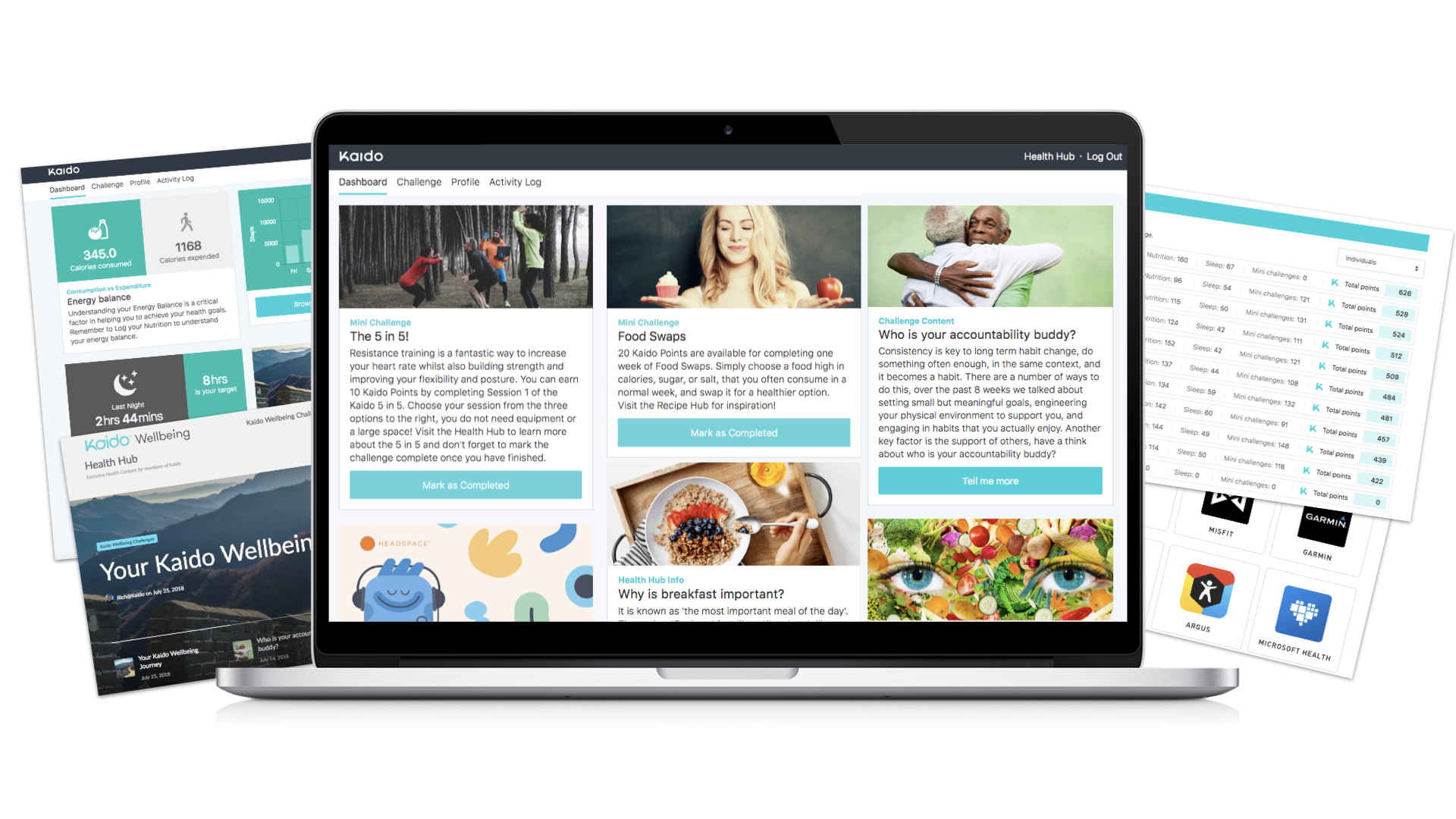 “The West Midlands AHSN have been a critical part of Kaido’s development. The signposting, learning and access to finance provided by the WMAHSN has helped Kaido to develop and refine its business model and product offering at speed and in collaboration with its ultimate customers and users. The WMAHSN have also helped Kaido to develop a trusted, recognisable brand that is hugely important in the healthcare market.”
Rich Westman, CEO and Founder of Kaido
Overview

Kaido Wellbeing is a Health Engagement platform designed to support business employees in taking greater control of their physical, mental and social wellbeing.

Either individually or as part of self-selected teams of up to 10 colleagues, users take part in a virtual challenge and compete to earn Kaido Points. Kaido Points are awarded based on the % improvement users make in their physical activity, mental health, nutrition and sleep. 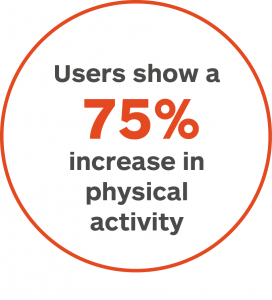 Underpinned by behaviour change components such as Gamification and Nudge Theory, users receive personalised health insights, based on the aggregate data shared from their connected smartphones, wearables or app-based tracking applications.

Since its launch in January 2018, the Kaido Wellbeing solution has benefitted over 20,000 business employees. Users show a 75.5% increase in physical activity and a 37.8% decrease in work related stress.

How is the AHSN involved?

The West Midlands AHSN (WMAHSN) started supporting Kaido in April 2016 as part of their Digital Health Accelerator based at iCentrum in Birmingham. Initially support was focussed on idea creation and market research, before moving to focus on important access to early stage funding. 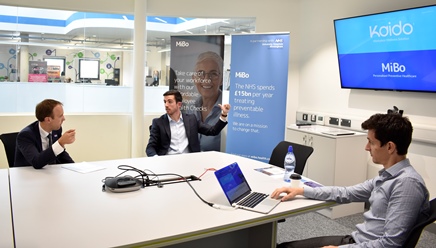 The WMAHSN facilitated introductions to Creative England and EIT Health and also invested into Kaido through their own SME Innovation Fund. In 2018, the WMAHSN have continued to open doors for Kaido, helping them to successfully commercialise the Kaido Wellbeing Solution after securing a paid contract with University Hospitals Birmingham NHS Foundation Trust.

Since then the WMAHSN has been pivotal in helping Kaido to become one of the fastest growing workplace wellness initiatives inside the NHS, growing to support the employees of eight NHS trusts (including ambulance trusts) across the UK. This support will continue in 2019 as Kaido aims for further adoption and scale.

“Kaido are a hugely innovative digital SME that have through their engagement with WMAHSN have successfully adapted their business model and are now starting to generate a good degree of implementation in to the NHS nationally.”
Amy Boulton, Opportunities & Programmes Coordinator, West Midlands AHSN

Kaido joined the WMAHSN Serendip Digital Health Incubator in April 2016. Since then, the WMAHSN have been instrumental in helping Kaido to raise important finance to develop the business. In May 2016 Kaido received £50,000 from Creative England following an introduction from the WMAHSN. In September 2016 Kaido received a further £50,000 from the SME Innovation Fund (UHB, WMAHSN, Mercia Technologies), the WMAHSN’s own fund. Both of these investments allowed Kaido to develop the first version of its Kaido Wellbeing solution. Finally, in November 2016 Kaido won EIT Health’s Headstart and Proof of Concept Fund, a £42,000 cash grant, as well as in kind support from IBM, Pfizer and Proctor & Gamble. The WMAHSN has continued to support Kaido founder Rich closely since then, brokering introductions to clients including UHB, as well as prominent leaders in the space. The best example of this is the most recent meeting with Secretary of State for Health and Social Care Matt Hancock, where Kaido shared their solution and its impact on the preventative health agenda.

Kaido has grown steadily to a team of seven, three of these are full time positions created as a result of the WMAHSN’s support. A further four are currently part time but will move to full time positions in the new year. Since its launch in January 2018 the Kaido Wellbeing solution has generated £130,000 in revenue and Kaido expects to double this by the end of quarter two of 2018.

In late 2017, Kaido won the WMAHSN’s Economic Impact Award supported by Mercia Technologies for its potential future costs savings to the NHS. 51% of Kaido users report feeling more motivated at work as a result of using Kaido which has a positive impact on work related absenteeism, presenteeism and job satisfaction: all huge costs to both employers and the NHS.

“Kaido has been a wonderful eye opener for me. It has helped with my motivation, finding time to look after myself, and also increased my activity with my children. Which is something I really value.”
Service user

Kaido has ambitious plans to scale its service, and also maintain its position as the most cost-effective digital wellbeing solution for public service organisations such as the NHS.

In November 2018, Kaido signed a partnership with the UK’s largest occupational health software provider Cohort Software. This will see the Kaido Wellbeing solution given free to 150 business clients across the UK, New Zealand, Australia and the Far East in March 2019. During this time Kaido plan to extensively evaluate the Kaido Wellbeing solution, to better understand its impact and the subsequent Health Economics associated with its use.

Opportunities to get involved

Over the next 12 months, Kaido are looking for academic partners to validate and evidence the impact of its programmes. Kaido want to be recognised as a thought leader in the workplace wellness space, using demonstrable examples of best practise to refine the Kaido Wellbeing proposition and further develop the business.

In addition, 87% of businesses have workplace wellness as an agenda before 2020, thus if any AHSN affiliated organisation is looking to develop their own employee wellbeing strategy, Kaido would love to help.

Started in April 2016 and Kaido remain as part of the Serendip incubator. Kaido will launch an International Partnership in March 2019.

Making better use of data and digital technology