Since 2015, all organisations within the West of England Patient Safety Collaborative (PSC) have been involved in a major programme to introduce the National Early Warning Score (NEWS) at all handovers of patient care – primary care, ambulance, hospital, community and mental health.

Building on the successful outcomes of this work in the West, the National Quality Board has endorsed the adoption of NEWS across all NHS acute care and this is now a clinical priority for NHS England.

NEWS and NEWS2 (updated with improvements identified during the implementation and evaluation of NEWS) are fully endorsed by NHS England and NHS Improvement and will become the early warning system for identifying acutely ill patients – including those with sepsis – in hospitals in England.  In April 2018 new CQUIN indicator guidance was produced which includes NEWS/NEWS2 relating to reducing the impact of serious infections.

Structured observations, or early warning scores (EWS) have been used for some time to recognise deterioration in the acute hospital setting.  In 2015, The Royal College of Physicians (RCP) introduced the National Early Warning Score (NEWS) to standardise the approach across England. The NHS alert NHS/PSA/RE/2016/005 requires all acute providers to standardise their approach to deterioration [1].

In 2015, approximately 7% of patient safety incidents reported to the National Reporting and Learning System (NRLS) as death or severe harm were related to a failure to recognise or act on deterioration [2]. Sepsis kills around 44,000 people per year in the UK [3] and NEWS has been recommended by National Confidential Enquiry into Patient Outcome and Death (NCEPOD) as a tool to enable early detection and treatment of sepsis [4].

The aim of this which started in 2015 was to standardise to NEWS across all acute trusts in the West of England AHSN (WofE AHSN) and to move the use of NEWS scores into pre-hospital care.  By agreeing escalation triggers the aim was to facilitate early recognition of acute illness including sepsis. This also enabled standardised communication across the system so that acutely unwell patients could be seen at the right time in the right place by the right grade of clinician.

The Institute for Health Improvement’s Breakthrough Collaborative Approach was used to influence change across a whole system. This was supplemented by local health community meetings which met under existing NHS structures. This led to trusts and community providers using a standardised approach to recognising and responding appropriately to the deteriorating patient. 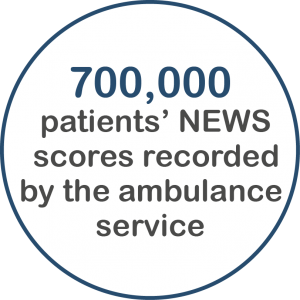 Highlights so far include:

The aim was for NEWS to be used at the point of a referral of acutely unwell patients and throughout their entire journey into secondary care.  The use of NEWS is not recommended in children under the age of 16 and pregnant women and outside the scope of this project.

Using NEWS at each handover of care as a standardised communication tool enables the sickest patients to be seen at the right time, in the right place by the right grade of clinician.  The WofE Patient Safety Collaborative (PSC) wanted to show that NEWS could be successfully used to identify sick patients, both inside and outside of secondary care settings.

Since the Royal College of Physicians (RCP) updated to NEWS2, our objective has been to support the region-wide transition to NEWS2.

The Institute for Healthcare Improvement’s breakthrough collaborative model was used. It is designed to close the gap between what is known and what is done by creating a structure in which interested organisations can easily learn from each other and from recognised experts in topic areas where they want to make improvements.

Teams from across the healthcare system met every six months at collaborative events.  In addition, health community task groups met more frequently to lead the work where teams met under existing NHS structures. This was supported by the introduction of an emergency department collaborative and a primary care collaborative.

Organisations collected data on number and accuracy of NEWS scores as process measures. Data is presented using run charts both at individual trust and aggregate level. Emergency departments have monthly audits on whether NEWS is recorded on triage.

There was significant enthusiasm for the project as evidenced by the positive feedback forms received following each event. This enthusiasm was harnessed by the collaborative to push forward the project as most people understood the case for change and were keen to make it happen.

Many of the clinical leaders already had experience of quality improvement and the breakthrough collaborative approach. Acute and community trusts had been involved in a region wide safer care collaborative 2009-2014.

Some parts of the pathway were less familiar and less confident to standardise their approaches as their perception was that their own system/approach had worked to date and questioned the need to standardise. The response to this was to emphasise the clinical evidence, focus on the value of addressing human factors in designing safe systems of care, exploring at all time differences of opinion and creating a coaching culture so ‘all learn, all teach’.

Implementing change in a very complex system is difficult and organisations were at different starting points in terms of Quality Improvement (QI) experience and knowledge of NEWS.  The breakthrough model alone was not enough and this was supplemented with meetings using traditional NHS structures, meetings and project planning.  The QI Academy at the WofE AHSN was also utilised to support QI training.

There was some reluctance to use NEWS at handover in the emergency department. An Emergency Department (ED) collaborative was set up to spread use of an ED checklist which included NEWS. By allowing EDs to modify the checklist and discuss the issues related to ED, this also engaged this group of clinical staff.

There was also a big advantage in having a single ambulance trust covering the region.  This is because any handover between the ambulance service and another provider would use NEWS, meaning others began to adopt in order to share a common language.

Evidence from the qualitative analysis suggests digital enablers made NEWS easier to adopt. NEWS templates were put into GP IT systems such as EMIS and Adastra and SystmOne.

The project drew support from all areas. There was collaboration between the NIHR CLAHRC West and the Universities of Bristol and Cardiff for evaluation. In addition the WofE AHSN provided support to develop innovative solutions to the problem. Innovative devices able to record observations and support the automatic calculation of NEWS are being explored.

What would we do differently?

Building on the work of the Patient Safety Collaborative in the West of England, in June 2017 the National Quality Board endorsed the adoption of NEWS across all NHS acute care and this is now a clinical priority for NHS England [5].

NEWS2 was released by RCP in December 2017. NHS England have updated their CQUIN planning guidance to require acute trusts to adopt NEWS2 by March 2019. A recent national survey demonstrated that all but one acute trust in England are using NEWS, and most have updated to NEWS2. By Q4 of 2018/19 if acute and emergency units have transitioned, with over 90% of screened cases have been screened using NEWS 2, they will receive payment [6].

The WofE AHSN has supported all organisations moving to NEWS2.

The project is now looking at patients who are acutely unwell where escalation would not be appropriate, for example those receiving end of life care. The next step is to standardise the use of the ReSPECT form and the communication and approach to end of life care. This has been agreed by all member organisations, who now recognise RESPECT. More information about this can be found on the WoE AHSN website.