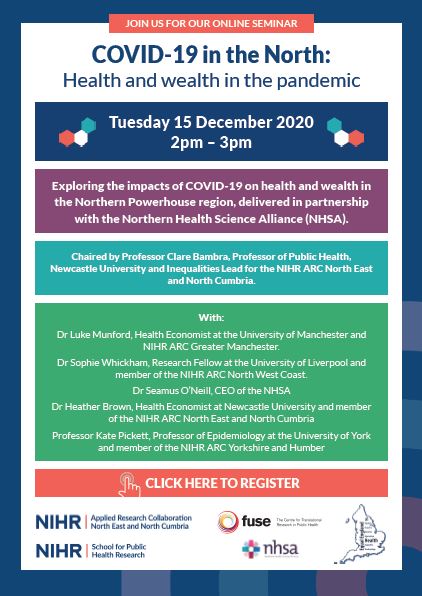 COVID-19 in the North: Health and wealth in the pandemic by NIHR ARC North East and North Cumbria (NENC)

COVID-19 in the North: Health and wealth in the pandemic by NIHR ARC North East and North Cumbria (NENC)

A one-hour seminar exploring the impacts of COVID-19 on health and wealth in the Northern Powerhouse region, delivered in partnership with the Northern Health Science Alliance (NHSA).

This session will allow you to hear from contributors to the report, including from NIHR Applied Research Collaborations (North East and North Cumbria, Greater Manchester, North West Coast, Yorkshire and Humber) and the NHSA.

Chaired by Professor Clare Bambra, Professor of Public Health, Newcastle University. Clare is also Inequalities Lead for the NIHR ARC North East and Cumbria, as well as for the NIHR School for Public Health Research (SPHR) and Fuse, the Centre for Translational Research in Public Health. She is also Director of the Fuse-led Equal England Network, part of the NIHR SPHR.

Dr Luke Munford, Health Economist at the University of Manchester and a member of the NIHR ARC Greater Manchester.

Followed by a panel Q&A session featuring the above report co-authors, alongside:

Professor Kate Pickett, Professor of Epidemiology at the University of York and a member of the NIHR ARC Yorkshire and Humber.

This is the second in a series of six online seminars around Inequalities and Prevention and Early Intervention and Behaviour Change.

The series is delivered by the NIHR ARC North East and North Cumbria, in partnership with Fuse, the Centre for Translational Research in Public Health, the NIHR School for Public Health Research, and Equal England.