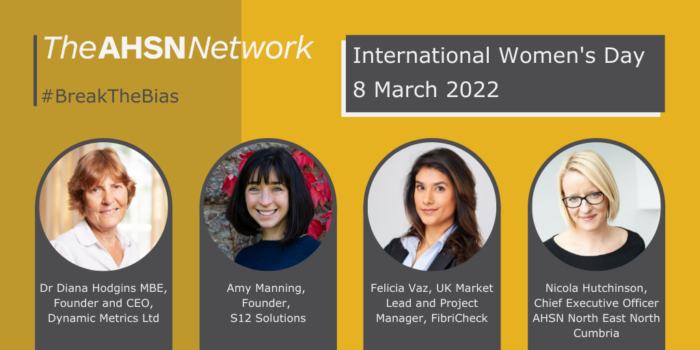 With the need to develop new and innovative techniques, treatments and collaborations, the pandemic highlighted how bringing the best and brightest to key roles is vital. And to celebrate International Women’s Day, we’re proud to be able to highlight cases where innovative female leaders are making their mark in the world of health and social care.

A website dedicated to women in tech quotes that even though female health workers make up the largest percentage of the global health workforce, statistics show only 9.7% of funding goes to female-founded Health Tech start-ups.

Within the AHSN Network, we’re committed to supporting inclusive innovation and bringing out the ideas of under-represented groups. We need innovators from all backgrounds who can develop and support solutions that enable the inclusion of all members of our society.

Below you can see the stories of three female innovators we interviewed, their experiences of being a female in a predominantly male industry and advice to other women looking to spread their health and care innovations.

As the UK Market Lead and Project Manager, Felicia is responsible for FibriCheck, an app that allows the timely detection of cardiac arrhythmias. In 60 seconds, users are informed of their condition avoiding the need for clinic visits and A&E admissions.

FibriCheck has received support from the Innovation Agency, the AHSN for the North West Coast, who are rolling out FibriCheck to seven sites across secondary care clinics and hospitals trusts, while Eastern AHSN roll-out a completely virtual secondary care pathway in two trusts. UCLPartners has offered FibriCheck to Redbridge Primary Care Network patients along with their annual flu jab or coronavirus vaccination.

Felicia gave the following advice to female innovators: “Don’t be afraid to experiment. Being a female entrepreneur/innovator can be tough. Especially in the tech space, which is still largely male dominated. While it can be hard to know if you’re making the right move, sometimes you have to overcome your self-doubt and go with it. Own the space you’re in and engage others to support you. The NHS Innovation Accelerator and DigitalHealth.London Accelerator programmes are great spaces for this – they allow you to ask the ‘stupid’ questions and figure things out with others in the same position.”

Mental health wellbeing is the focus of Amy Manning of S12 Solutions. The company has developed an app and website, which has helped replace a paper system used by mental health workers. The innovation helps minimise delays and reduce pressure on staff.

“I am a social worker and a mental health professional and was convinced that there was a better way,” Amy said. “We are working with around 75-80% of mental health trusts in England, supporting around 6,500 users.”

Amy reflected on being a female innovator:

“I’ve noticed it’s a very male dominated world when you get to decision-maker level. I was often the only woman in the room. For me it was less about being a woman as such and more about working out how to be and feel confident in this new environment, which was very far away from the world of social work I was used to.”

Another innovative device is GaitSmart, a portable system that analyses how people walk. The data is used to provide a personalised exercise programme and help patients take a more active approach in their rehabilitation.

“We tend to work with older people with hip or knee osteoarthritis,” Diana said.
“We’ve seen that people are motivated to follow the programme, which results in less physiotherapy involvement. It allows people to have dedicated rehabilitation therapy, including before surgery.”

GaitSmart received support from UCLPartners who helped to scale up the programme, and Eastern AHSN introduced the company to health and care contacts and to work out where the innovation sits in a care pathway.

Diana had this advice for female innovators: “Try to think about your job and what you do, rather than your gender. It’s easy to start thinking too hard about things, especially when there are no other women doing what you’re doing. But if you shift your mindset to think about whether you can solve a problem and the answer is yes, it’s more important to get on and do it so you can make a difference.”