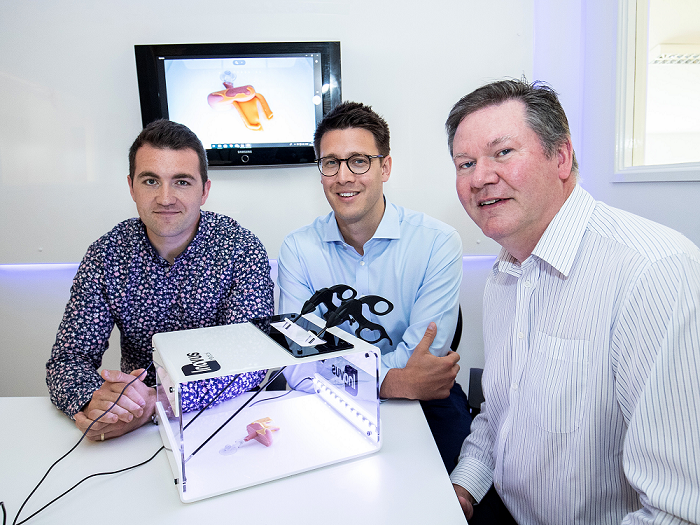 Elliot and a fellow student built a medical training device in a bedroom – and now they run a business which produces and exports different models to 100 hospitals worldwide. The Innovation Agency, AHSN for the North West Coast, helped them to access major funding which accelerated their growth.

I was a medical student when I first met my future business partner Jordan Van Flute at a party (pictured above left). He was a psychology student and was finding it difficult accessing the equipment he required for his research.

We decided we could produce more affordable laparoscopic devices by producing the parts ourselves. In the beginning we were bending pieces of plastic with rudimentary jigs; now we use thermo forming, CNC machining, laser cutting, 3D printing and silicone injection moulding.

We soon moved to a unit in St Helens and after a few years secured funding from different sources, including privately raised capital and £80,000 from the MSIF Northern Powerhouse Investment Fund.

I continued to train as a doctor and became one of the NHS Clinical Entrepreneurs, a brilliant concept led by Tony Young, who is now a strong mentor and Inovus supporter. Last year I was introduced to my local AHSN, the Innovation Agency, and their support has been invaluable in helping to accelerate our growth.

We were told about SBRI Healthcare funding and the AHSN assisted our application. They also supported our bid to the European Institute of Innovation and Technology Health’s Headstart competition, resulting in us receiving £100,000 and €50,000 followed by further funding from the Northern Powerhouse Investment Fund and an angel investor. In 2019 we saw further success with an award of a £1million product development contract through SBRI Healthcare, supported by NHS England which was yet another fantastic achievement to support the development of our latest innovative product.

The LapAR™ is initially to be launched with general surgery and O&G specific tasks as well as the full suite of LapPass® tasks from the ALSGBI. Proprietary instrument tracking technology enables capture of instrument handling and performance metrics with all performance data displayed in an online portfolio, making this the perfect distance learning platform for widescale laparoscopic simulation.

Demand for this product is set to be high – and we want to ensure we become the number one choice in general surgery and gynaecology simulation training, globally.

Inovus Medical now has an expanding range of healthcare simulation products on the market and our original turnkey laparoscopic simulator has been sold in over 70 countries worldwide and used by over 100 hospitals.

It has been an incredibly hard slog to get to the point when doors began to open and funding started to flow but over the course of the last 18 months the company has grown not only in staff numbers (currently a team of 19) but in recognition too across the globe.

Our aim is to level the playing field by introducing affordable products that are helping more trainee surgeons across the globe learn about laparoscopic surgery and gynaecological procedures through highly realistic simulation, which is good for the NHS and more importantly good for patient safety.