More than 100 NHS trusts in England have adopted an innovative device that secures central venous catheters without requiring sutures or adhesives, which improves patient safety and experience.

SecurAcath is one of four innovations on the NHS England and NHS Improvement Innovation Research and Life Science team’s new MedTech Funding Mandate policy. It provides continuous securement from catheter placement and doesn’t need to be changed or require sutures or adhesives. It secures at the insertion site using small, flexible securement feet placed in the subcutaneous tissue below the dermis. This allows for improved site cleaning, minimises catheter movement and eliminates the risk of accidental dislodgment or migration during routine dressing changes.

As the delivery arm of the MedTech Funding Mandate, the AHSNs have been supporting the rollout of SecurAcath, which has benefitted more than 77,000 patients in the last year alone. [1]

One SecurAcath lasts the life of the line, lowering the total cost of patient care by removing the need for a weekly change of adhesive securement and reducing catheter complications.

Find out more about SecurAcath in this short film with Jennifer Miller, National Clinical Specialist at Aquilant Healthcare 21, the UK distributor of SecurAcath. 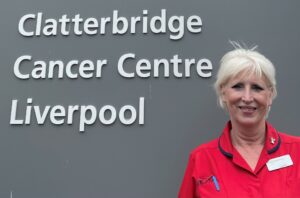 Carol McCormick (pictured) is a Clinical Interventions Lead Nurse at The Clatterbridge Cancer Centre NHS Foundation Trust. The Trust provides specialist cancer care to people across Cheshire, Merseyside and the surrounding areas including the Isle of Man.

Carol said: “I’ve worked in the Clinical Interventions team since 2007. My role was created to improve intravenous (IV) access, gaining long-term access needs for our patients on certain chemotherapy regimens. When I started, many patients had difficult venous access and weren’t being offered a central line that would benefit them and prevent the venous damage that chemotherapy drugs can cause.”

Carol was one of the first practitioners in the UK to adopt the SecurAcath in 2012.

“I changed the focus of how nurses and consultants looked at access needs for our patients. Patient satisfaction was important to me, knowing how damaging chemotherapy agents can be to your veins it was essential to make sure we had the right processes in place.”

“When we first considered SecurAcath, we undertook a trial with 30 patients using the device for six weeks to test the reliability of the line staying in the same place. For a line to be optimal and in the safest position it needs to stay in place, as close to the heart as possible without it migrating out bit by bit. Immediately we found that the lines weren’t being pulled out or migrating. As it sits at the skin edge, and you know you aren’t going to pull the line out our nurses were able to clean 360° around the device, which contributed to the reduction of line infections.

“If I was to advise to anyone thinking of adopting SecurAcath, I would encourage them to have an internal launch programme – emphasising the benefits to staff and to put in place training initiatives. Some of my team were nervous about using the devices at first. Initially, they were worried they might hurt the patient, so they kept them as still as possible when they should be moved regularly. I held teaching sessions to settle these fears and trained the team to place the device deep enough into the sub dermal layer, so it wasn’t uncomfortable for the patient and how to optimally apply dressings to make sure they don’t twist it or pull it to the side.”

Annual savings across the NHS in England from using SecurAcath are estimated to be a minimum of £4.2 million based on data reviewed by the NICE Advisory Committee.

“The cost savings are quite noticeable and come from reducing the need to replace lines and no longer needing to double-dress the area. The reliability and the impact this has on patient care is the most important factor, which is why I’m such an advocate.”

Listen to Carol on our AHSN Network Health Innovation Podcast.

Joseph Goldberger President and CEO of Interrad Medical, the company behind SecurAcath, reflected on Carol as an early adopter of the innovation in the UK:

“Carol contacted us soon after SecurAcath was first commercialised, having read a short article in the British Journal of Nursing. She, along with colleagues at three other centres, reached out to our website expressing an interest in evaluating SecurAcath. At the time, our focus was solely on commercialising the product in the US. However, I was travelling to the UK on holiday with my family and decided to visit the sites that had enquired. Today, those four sites serve as the pioneering reference centres for SecurAcath in the UK.

“As an innovator, Carol immediately recognised the value of the technology and the difference it could make for her patients and clinicians. Carol has been an unwavering supporter, providing insight to hospitals considering using SecurAcath for the first time.

“I’m extremely grateful to Carol for making that enquiry. Without key opinion leaders like her, SecurAcath would not be maintaining critical vascular access for children and adult patients all over the world.”